Hailing from the Rocky Mountains of Colorado, The Railsplitters feature a classic line-up of banjo, fiddle, mandolin, guitar and double bass but their music is a little different from the norm. A high energy, unconventional  brand of modern bluegrass, it draws on varied influences including folk/roots, Americana, modern pop and rock & roll. The band’s recently released third album, Jump In, features top notch instrumental playing, strong lead and harmony vocals and beautifully crafted original songs.

The Railsplitters embark on an extensive UK tour (25 Jan – 17 Feb 2018), including their debut appearance at Glasgow’s prestigious Celtic Connections festival. Since their last visit to the UK in spring 2016, the band has acquired two new members – Joe D’Esposito (fiddle) and Jean-Luc Davis (double bass). It’s a good time to re-post this interview from December 2015 with virtuoso banjo player and principal songwriter, the gloriously named Dusty Rider – what a fascinating guy!

Hi Dusty! Tell me a bit about your personal musical history – how did you come to play the 5-string banjo?

It started with an American TV show The Andy Griffith Show. I saw this band The Dillards on there and I remember this song There Is a Time with Charlene Darling [The Darlings were a fictional string band played on the show by The Dillards plus a couple of actors]. The banjo stuck out as the instrument that sounded the best to me and seemed the most interesting. BUT the only reason I’m playing it is because the guitar was too hard! I tried playing my dad’s guitar and I couldn’t do it. My grandma had a banjo in her closet and I found it and proceeded to teach myself. I was a freshman in high school; I think I was 14 years old at the time.

You certainly seem to have an interesting CV– is it true you’ve been both a brakeman on the railroad and an air traffic controller?! Is music your full time occupation now?

Yeah, that’s right! The downside of working in transportation is that it tends to be a 24 hour a day, 7-days a week gig. Basically the schedules didn’t work well with being a musician. So now I’m a full time touring musician, teaching now and then. At the moment I don’t have many students because I’ve been away from home for practically the entire year. But when we were in Dresden, somebody emailed me before the tour and asked if he could come for a lesson. In between sound check and dinner we got together for 45 minutes and I taught him everything I know!

You get a lot of praise for your original songwriting. Did The Railsplitters start out as more of a traditional bluegrass band or was it always a vehicle for original songs?

We started out mostly traditional – like the track Where You Are on the first record, plus Jackson Town, which was in a traditional style although it was written by Lauren, and Lonesome Feeling and a couple of others. That was what we did, because we mostly met at bluegrass jams and so you play stuff that everybody else knows, or that’s easy enough to teach. None of us ever set out initially to carve our own path into the songwriting world. I certainly didn’t think of myself as a songwriter, until one time we were driving down the road and I asked the other band members “I’ve got this melody in my head and it goes like this – do you think we could make something of it?” They were like, “sure, let’s try it out” and that’s what turned into the song My World. I had the chords and the chorus. Pete (mandolin) was the one who came up with the words. It’s been fun, and I’ve been trying to be less directive in how I write. I’ve always enjoyed writing for an ensemble, but I’ve been finding to find a way to let the band bring more to the process, because they’re great at it!

Getting back to bluegrass picking and banjo playing in particular – what were your main influences?

Once you get past Earl Scruggs, who was obviously a huge influence, for me Bobby Thompson was really important. I credit Pete Wernick with teaching me, even though he didn’t teach me directly. But I used his Bluegrass Banjo book and I still regard it as one of the most well put together books I’ve encountered for learning an instrument. He talks about Scruggs style, about melodic style, Tony Trischka, he talks about single string and Don Reno style. I should also add Bela Fleck and Noam Pikelny as well as Bill Keith – they were all important influences. I love pretty much any melodic player.

I also understand you did a stint with the legendary Byron Berline and his band?

Yes! That was pure chance. I was training to be an air traffic controller (ATC) and every ATC has to go down to Oklahoma City to do their basic training. I had to be there for four months and while I was there, I went to Guthrie where Byron Berline has his shop [The Double Stop Fiddle Shop & Music Hall]. I had no idea until then just how much of an impact he had on the music industry. I went up there kinda hoping I could play banjo and figure out how to jam with him. He let me play some of the banjos from the shop and told me to come on by to a concert that night that he hosts above his music shop every other week. I played in the jam and then at the show, he had me come up toward the end of the night and sit in on a couple of tunes. I ended up playing with the band for the duration of my time there, filling in for [regular banjo player] John Hickman.

The Railsplitters toured the UK in June 2015 – was that your first time here?

June 2015 was the first time that any of us had been to the UK, if I’m not mistaken. That was the first year that we’d visited Europe as a band and it’s been kind of life changing, to be honest. It’s fascinating to get out of America, where our style of music is sometimes dismissed by most of the audiences that we play for, and come to Europe. That was the most striking thing in the UK, that everyone listens to an almost abnormally high degree of concentration and focus. Initially it was kind of hard to play, because we weren’t sure how people were reacting, but then at the end of the night everybody would come up to us and tell us how much they loved the show. Once you get past that initial culture shock then everything gets easier. They really treat us so well over in Europe.

We’re looking forward to welcoming back The Railsplitters in January and February 2018 for their biggest UK tour yet! 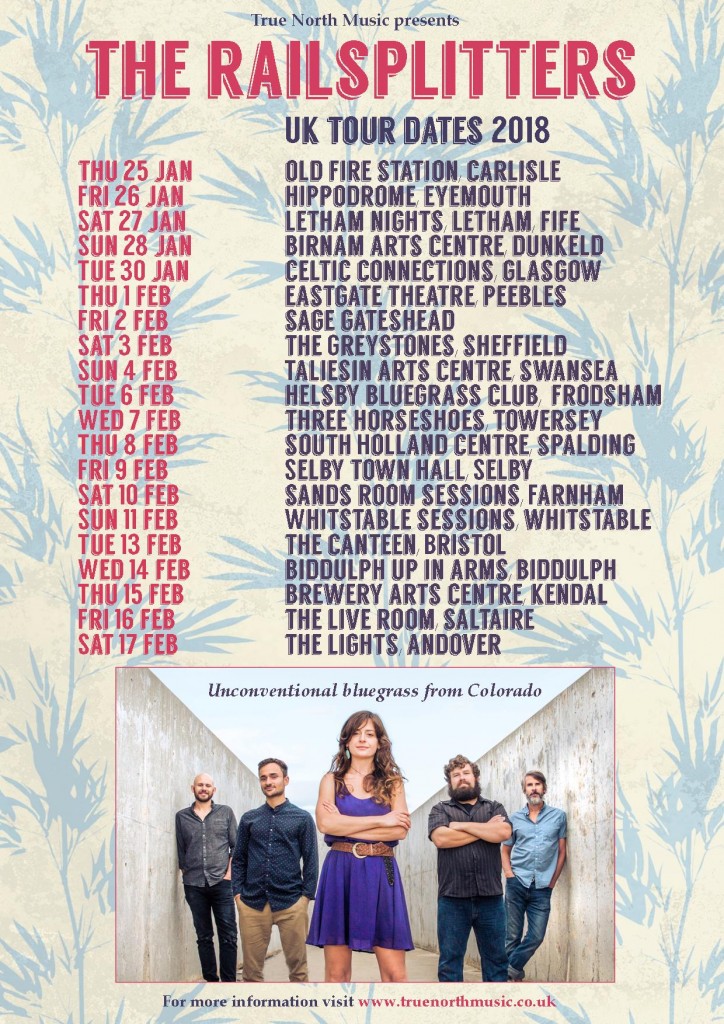