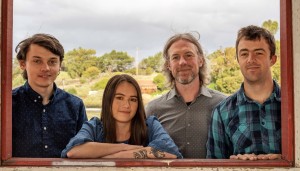 AJ Lee & Blue Summit made a big impression on their first short tour of the UK this summer, with several sold out shows and glowing reviews from fans and promoters. Formed in 2015, the band brings a fresh modern approach to bluegrass and Americana, combining virtuoso instrumental work with soaring vocals and sweet harmonies, and taking in elements of western swing, soul, folk, jazz and pop/rock. A powerful singer, talented mandolinist and gifted songwriter, bandleader AJ Lee has been making waves on the acoustic scene for many years, performing with family band The Tuttles (alongside celebrated guitarist Molly Tuttle) since she was just ten! Flatpicking guitar ace Sully Tuttle (younger brother of Molly) was also a member of The Tuttles throughout his teens. Now in their early 20s, AJ and Sully perform together with their equally talented Blue Summit bandmates Jesse Fichman (guitar/vocals), Chad Bowen (upright bass/vocals). They will be joined on their UK tour by their regular fiddle player Jan Purat, a virtuosic fiddler who has performed with Front Country and The Bowties among others. As a solo artist and leader of this exceptional band, AJ Lee has released two solo albums in addition to Blue Summit’s two band recordings (debut Sweet Company and 2019’s Like I Used To.)

“One of the best new bluegrass acts to appear in the UK for many years. Led by the sweet-voiced AJ Lee with great supporting guitarwork and crooning swing vocals from the charismatic Sullivan Tuttle, these cool guys will be major festival fixtures for years to come.” – Gate to Southwell Festival review

Blue Summit has performed throughout California and across the USA, and their star has been rising of late, with 2019 seeing their first short tour of the UK and Ireland and a triumphant main stage performance at the La Roche Bluegrass Festival in France. In September 2019, the band were official showcase performers at the International Bluegrass Music Association (IBMA) festival in North Carolina. AJ also won the coveted IBMA Vocalist Momentum Award there, just a few days after Blue Summit won the Freshgrass Band contest in Massachusetts. That very same week, Sully Tuttle took second place (and a very nice handmade guitar as his prize) in the prestigious flatpicking guitar championship contest in Winfield, Kansas!  With soulful songs, exceptional musicianship and a charming stage presence, AJ Lee & Blue Summit are sure to make many more fans when they return to the UK in May/June 2020!