Thanks to all who came out to see Evie and Keith on fine form this spring!

* This engagement is supported by Mid Atlantic Arts Foundation through USArtists International in partnership with the National Endowment for the Arts and the Andrew W. Mellon Foundation

California-based duo Evie Ladin and Keith Terry perform a hugely entertaining mix of Appalachian roots music, step dance and body percussion. Multi-talented singer, songwriter, clawhammer banjo player and step-dancer Evie Ladin is a supreme live performer. Evie was a recipient of the 2020 Jubilation Fellowship, awarded to artists with an exceptional talent for bringing joy to people through music and movement! She grew up surrounded by traditional folk music, playing banjo from the age of 8 and clogging since she was just 5. Evie attended Brown University where she created a major in African Studies in Dance, later studying dance in Nigeria on a Fulbright Fellowship. Formerly a member of the Stairwell Sisters, Evie is steeped in Appalachian music and dance, but also brings a contemporary vision to her music – in her work with Keith Terry and the Evie Ladin 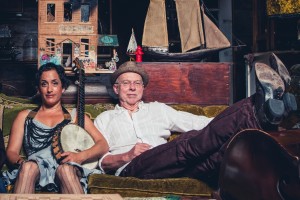 Band, and as leader and choreographer of the all-female MoToR/dance contemporary dance company. She’s also an in-demand music and dance tutor.

Trained as a jazz drummer, talented musician & dancer Keith Terry takes care of double bass and percussion, with clever lines and unusual grooves, as well as joining Evie in dance elements of their performances. Keith is the founder of the International Body Music festival and is a spectacular proponent of the art of body percussion. He’s an in-demand tutor and performer at venues and festivals worldwide, and is the ensemble director of Crosspulse, a California-based non-profit dedicated to rhythm-based intercultural music and dance. Together, Evie and Keith create a mesmerising live show full of variety. The duo has toured the UK a number of times, including acclaimed performances and workshops at WOMAD Festival 2018.

Evie Ladin & Keith Terry have been awarded funding support by the Mid-Atlantic Arts Foundation with relation to their UK festival performances at Crossover Festival (1 & 2 May 2022) and Edinburgh TradFest (8 May 2022):

These engagements are supported by Mid Atlantic Arts Foundation through USArtists International in partnership with the National Endowment for the Arts and the Andrew W. Mellon Foundation