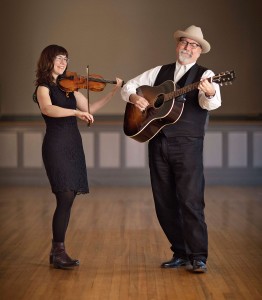 Joe Newberry & April Verch are both outstanding musicians, and their duo collaboration is fuelled by a shared passion for bringing people together to celebrate traditional music, blending folk, bluegrass and old time Americana, with ballads, joyful fiddle tunes and poignant original and traditional songs.

Joe Newberry is a top notch banjoist, guitarist, singer and songwriter. He was a guest star on 2016’s popular Transatlantic Sessions live tour and his award-winning songs have been recorded by artists including Ricky Skaggs. Joe’s other projects include his duo with mandolin legend Mike Compton. Joe regularly teaches guitar, singing and clawhammer banjo across the USA and Europe, and is a charismatic performer who charms audiences wherever he goes. April Verch is a world class fiddle player, step dancer and singer from Canada’s Ottawa Valley, who started step dancing at age three and playing the fiddle at age six! April has countless awards, ten albums and sixteen years of touring around the world under her belt with her own trio the April Verch Band. Passionate about passing on folk traditions, April also makes master classes, workshops and camps a regular part of her touring activity.

These two hugely talented musicians have now come together for this very special duo project. Their voices blend in harmony, their instrumental playing is unsurpassed, and the addition of April’s spectacular step dancing takes their live performances to another level! They released their first album Going Home last year on Apple Music.