We’re delighted to announce our Streaming Across the Sea Online Festival, featuring an outstanding line-up of the finest Americana, bluegrass, folk and roots artists (scroll down for full info and video clips). Please join us on Sunday 4th July and Saturday 10th July (split over two weekends to avoid clashing with big Euro football matches!). We’ll be live streaming to our True North Music YouTube channel and our True North Music Facebook page (please subscribe, like and follow!). Huge thanks to Arts Council England for the funding support (see more details below). We’ll also be requesting donations for the concerts, which will help us balance our budget and pay the performers as much as possible. There will be ticketed Zoom workshops in banjo, mandolin and step dance too –  visit this page for more details! 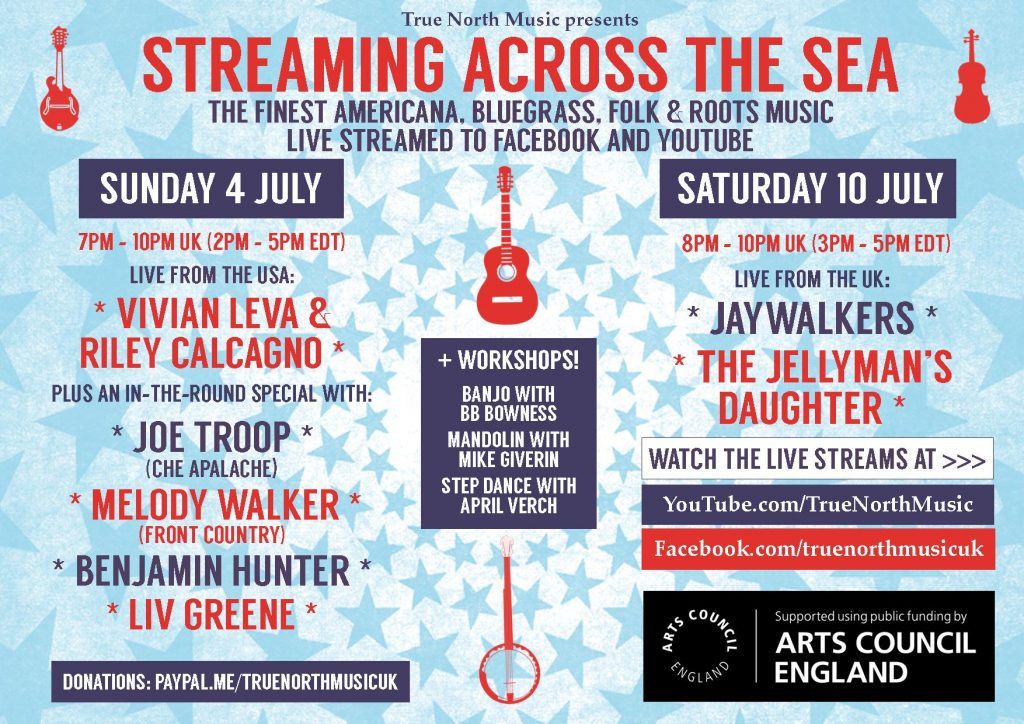 Two of the brightest talents coming up on the USA’s roots music scene, Vivian Leva & Riley Calcagno combine exquisite musicianship (on guitars, fiddle and clawhammer banjo), compelling songs and gorgeous singing. Also known for being the core of footstomping old time band The Onlies, Viv and Riley’s duo project has a more reflective and evocative flavour, with exceptional original songs the focus of their music. Their debut self-titled album was released earlier this year and was produced by acclaimed Cajun musician Joel Savoy. It’s a real corker, combining acoustic Americana,  classic country and dashes of old time and bluegrass. We’re really looking forward to hosting this brilliant twosome from Oregon!

We’re planning to make a virtue out of necessity, bringing together four exceptionally talented performers from across the USA to participate virtually in a songwriter-circle style evening of music and chat – thanks to our friends at Green Note for the format inspiration!

No stranger to our regular followers, the brilliant Melody Walker is best known as the frontwoman for mighty Americana-roots band Front Country, with whom she has toured worldwide for many years. She is an exceptional songwriter and one of the most soulful and powerful vocalists out there. She has recorded three acclaimed albums with Front Country in addition to her 2012 solo release and 2014 duo album with Jacob Groopman.  Melody has also co-written songs with renowned artists including Molly Tuttle and Justin Hiltner. Winner of the 2016 Vocalist of the Year Momentum Award at the International Bluegrass Music Association Awards, she has been a longstanding and fearless voice for diversity and inclusion in roots music. Melody is a longtime supporter of Bluegrass Pride, and co-wrote their unofficial anthem, Live and Let Live.

The multi-talented Benjamin Hunter has been playing the violin since the age of five, and is also no slouch on guitar and mandolin (and rattlin’ bones!) as well as having a fabulous singing voice. Perhaps best known for his award-winning work with Joe Seamons, Ben has toured the world performing the duo’s compelling blend of old time American roots, country blues and folk music. With a degree in Performance Violin, Ben has also always had a keen interest in politics and philosophy. Alongside his performing career, he works tirelessly to promote participation and inclusivity in the arts. He has co-founded a variety of vibrant initiatives in his hometown of Seattle, including the non-profit music education centre Community Arts Create and co-operatively owned restaurant and performing arts venue The Black & Tan Hall.

Joe Troop is a wildly talented and entertaining singer-songwriter and multi-instrumentalist (banjo, fiddle) from North Carolina whose musical adventures have taken him around the world, including a long stint living in Argentina where he founded the Grammy-nominated stringband Che Apalache in Buenos Aires. While teaching bluegrass and old time music there, he formed a band with several of his students, forming Che Apalache in 2013. Beginning as a bluegrass band, the quartet eventually incorporated Latin American styles into their repertoire, combining instrumental prowess with tight vocal harmonies. Since the Covid-19 pandemic saw Joe locked down back in North Carolina for many months in 2020, he has been doing more solo work and other projects (including Boojum with fiddle ace Nokosee Fields). Joe has also produced some fine music over the last year as part of his Pickin’ for Progress project. A brilliant and original talent!

At just 23, Liv Greene is already an astonishingly accomplished, award-winning songwriter and performer. Her 2020 album Every Bright Penny was produced by Isa Burke (Lula Wiles), and is packed with dreamy, evocative songs that feature Liv’s  gorgeous, distinctive voice front and centre, and a stellar band that includes Maddie Witler and Sean Trischka. Born in Washington DC, as a teen Liv took up guitar and songwriting and discovered Americana, bluegrass and old-time music. With a clutch of songwriting awards already to her credit, Liv is an alum of Interlochen Arts Academy and the New England Conservatory. She was a showcase artist at Folk Alliance International’s 2021 online event, and recently moved to Nashville from Boston.

We’re planning to film and livestream our UK artist performances from the beautiful concert room at our local community venue The Carlile Institute (Covid-19 restrictions permitting). We will not have any in-person audience, just a minimal crew (including the talented livestreaming experts from Northern Cowboy Films) to help put our broadcast together.

Hailing from Edinburgh, The Jellyman’s Daughter blend folk, Americana and a touch of bluegrass to bring you a highly original but beguiling musical landscape. Mixing gorgeous, haunting vocal harmonies with visceral cello, driving guitar and sweet mandolin, Emily Kelly and Graham Coe are also exceptional songwriters who have toured extensively in the UK, Europe, Canada and the USA. They will be joined by regular band member, outstanding banjoist Jamie Francis (Graham and Jamie are also members of BBC Folk Awards nominated band, Sam Kelly & the Lost Boys). TJD’s second album Dead Reckoning was released in May 2018 and the band also released a special Christmas album in December 2020. Emily, Graham and Jamie are all outstanding performers who engage their audiences with a captivating blend of excellent musicianship, superb vocal harmonies and terrific songwriting.

Since reaching the BBC Young Folk Awards finals in 2008, Cheshire-based trio Jaywalkers have cemented their place as one of the most accomplished young bands on the UK acoustic scene. Now with four albums and many years of touring under their belts, they draw on multiple influences, from bluegrass and folk to Western Swing and jazz. With a truly great lead vocalist in fiddle player Jay Bradberry, the band’s exceptional original songs (written by mandolinist Mike Giverin) are inspired by many themes, from the plight of Lancashire mill workers to the travails of life on the road for a travelling musician. Jaywalkers received the 2014 Emerging Excellence Award from the Help Musicians UK organisation, which enabled them to work with acclaimed producer Andy Bell on their 2015 release Weave. Bound together by their outstanding musicianship on mandolin, fiddle, guitar and double bass (Lucille Williams), Jaywalkers’ innovative music is nevertheless still deeply rooted in tradition.

We want to acknowledge the generous support of Arts Council England who awarded us funding from the Project Grants: Supporting Grassroots Live Music fund to support what was originally planned to be our first real-life Yorkshire Americana & Bluegrass Day in May 2020. Having postponed for a year due to the pandemic, and with continuing concerns around international tours and indoor gatherings in summer 2021, with ACE’s approval we have now adapted the event into the #StreamingAcrosstheSea Online Festival. This funding support has been absolutely vital to help True North Music to survive this time of no real-life tours and concerts and adapt to producing online events. It will enable us to pay all participating musicians a reasonable guaranteed fee, but we still need and welcome your donations!