Thanks to everyone who came out to support John Reischman & the Jaybirds on their May tour – we got fantastic feedback from fans and promoters alike!

We’re delighted to welcome John Reischman and The Jaybirds to the True North Music roster. Grammy winner and bandleader John Reischman is a mandolinist of the highest calibre. Celebrated as the master of taste and tone, Reischman cut his teeth with legendary West Coast groups The Tony Rice Unit and The Good Ol’ Persons. In  recent years he has cemented his reputation as a sought after guest instrumentalist and leader of this stellar bluegrass and old time Americana band. With members based across the Pacific Northwest, John Reischman and The Jaybirds have been performing and recording together for over twenty years, and have numerous tours, five critically acclaimed albums, two Juno nominations and two Canadian Folk Music Award nominations to their name.

Honey- voiced Trisha Gagnon from British Columbia covers double bass duties and anchors some gorgeous three-part vocal harmonies. Also hailing from BC, Nick Hornbuckle is an accomplished banjoist and composer.  LA-based guitarist Patrick Sauber joined the Jaybirds in 2017. He has performed with Doc Watson, Peter Rowan and Tim O’Brien among many other luminaries and played on the 2016 Grammy-nominated album The Hazel and Alice Sessions by Laurie Lewis. Standing in for 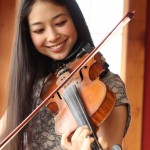 regular Jaybirds fiddle player Greg Spatz, acclaimed California bluegrass fiddler Annie Staninec has worked with many top artists from Mary Gauthier to Molly Tuttle. The seamless ensemble work of these musicians makes for a stylish take on bluegrass that is at once happily old-fashioned, yet with a fresh and modern feel. The Jaybirds’ live show features their trademark understated humour as a backdrop to impeccably performed original songs, instrumentals and traditional material.