The Slocan Ramblers wowed audiences across the country on their 20-date autumn 2018 tour. They return in Oct/Nov 2019 – more details here. 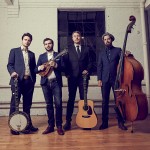 Hailing from Toronto, multi-talented Canadian band The Slocan Ramblers combines impressive bluegrass and old-time musicianship with a fresh approach and modern appeal. The Slocan Ramblers have steadily added to their list of awards and plaudits on home ground, and have been making inroads into the USA scene for a while, wowing festival audiences from Merlefest to Rockygrass. Their third album, Queen City Jubilee, was released in June this year, and has already amassed glowing reviews. The Slocan Ramblers blend lightning fast, devilishly intricate instrumentals with evocative vocals, on songs and tunes ranging from fine originals to rowdy old-time numbers.

“Contemporary bluegrass at its very best….their new album, Queen City Jubilee, could be the one that propels them to the forefront of the acoustic roots scene.” – Songlines magazine

Following a warmly received debut UK tour in autumn 2017, The Slocan Ramblers are out on tour in the UK now, already selling out shows and wowing audiences. They will return in October/November 2018.