We’re sorry to announce that the Laurie Lewis and the Right Hands 2020 tour has been cancelled due to the ongoing Covid-19 virus crisis. Please contact your point of purchase to arrange a refund – or if you can afford it, please consider donating your ticket money to help the musicians and venue survive in this devastating time for the grassroots live music scene.

You can also help the artist by buying her music – visit the Laurie Lewis website.

We’re delighted that bluegrass pioneer Laurie Lewis and her band The Right Hands will be visiting the UK for a short run of tour dates in England this spring, to tie in with a visit to Germany. Laurie is a bona fide folk and roots

music legend and a GRAMMY Award winning artist. Hailing from California, she has written some of the most enduring songs in bluegrass and has released almost 20 albums over the years, performing with scores of legendary artists across folk, bluegrass and beyond – including Linda Ronstadt, Ralph Stanley and Tim O’Brien. A hugely respected bandleader, songwriter, singer and musician, Laurie has influenced many of the next generation of acclaimed American roots artists, including members of Crooked Still, Front Country and Della Mae as well as Michael Daves, Tatiana Hargreaves, and countless others. Laurie’s latest album “and Laurie Lewis” is due for release in March 2020. This collection of duets features some of her many talented musical partners and collaborators, among them Kathy Kallick, Mike Marshall, Tom Rozum and Molly Tuttle.

“I first knew Laurie by her considerable reputation as a fiddle player and a writer of songs. When an opportunity came along to sing with her I seized it. Her voice is a rare combination of grit and grace, strength and delicacy.”  – Linda Ronstadt

A founder member of West Coast bluegrass band The Good Ol’ Persons in the 1970s, Laurie has long been a powerful voice in bluegrass, in every respect. Winner of 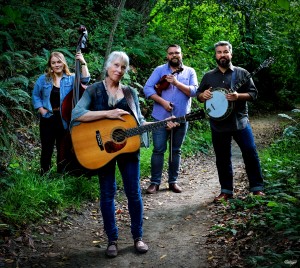 multiple International Bluegrass Music Association Awards, she also sang  and played on the 1997 Grammy-winning release The Songs of Bill Monroe, and more recently she was Grammy nominated for her album The Hazel and Alice Sessions (2016). This tribute to Alice Gerrard and the late Hazel Dickens – two of the first prominent professional female artists in bluegrass – featured contributions from Linda Ronstadt and I’m With Her’s Aoife O’Donovan among many more. Laurie will be joined on tour by her band The Right Hands, featuring outstanding acoustic musicians Brandon Godman (fiddle), Hasee Ciaccio (double bass) and Patrick Sauber (banjo) – all acclaimed talents in their own right. The band marries spectacular musicianship and top-notch vocal harmonies with Laurie’s award winning songs and interpretations of bluegrass and folk classics. This is a rare opportunity to see an acclaimed artist who remains at the top of her game. Unmissable!