FURTHER UPDATE – as at March 2021, we have now once again cancelled the proposed Golden Shoals dates due to ongoing uncertainty.

We’re re-scheduling Golden Shoals’ UK tour from October 2020 to 6th – 17th October 2021, due to the Covid-19 crisis. Quite a few dates are already spoken for but we still have some dates available. 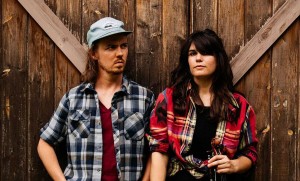 Now based in Nashville, Tennessee after several years in Asheville, North Carolina, Amy and Mark combine the polished technique of music conservatory training with the grit, drive, and soul of their musical heroes, legendary mountain musicians like Roscoe Holcomb and Ola Belle Reed. Equally influenced by wordsmiths like Gillian Welch and Townes Van Zandt, under their previous name they’ve released an EP and one full-length album, plus a footstomping collaborative release with the Old Time Snake Milkers. Their brand new album under the Golden Shoals name was released in August 2020. They have performed at venues and festivals across the USA and Australia in the last few years, and were a featured act on the 2019 Bluegrass Jamboree tour across Germany, as well as being a showcase artist at the International Bluegrass Music Association’s major World of Bluegrass festival in September 2019.

Both Mark and Amy have also proved their Appalachian music credentials by achieving multiple placings in the instrument contests at West Virginia’s legendary Clifftop festival and the celebrated Mount Airy Fiddler’s Convention. Both when performing and when teaching workshops, Golden Shoals strive to honour the ancient sounds of those who came before, while bringing their own unique voice to the stage. We’re delighted to be planning a late 2021 tour for this wonderfully talented, fun and versatile duo.

Now booking for October 2021. Please contact us for availability.