AJ Lee & Blue Summit made a big impression on their first short tour of the UK, with several sold out shows and glowing reviews from fans and promoters. We’re already making plans to bring them back for a longer run!

“One of the best new bluegrass acts to appear in the UK for many years. Led by the sweet-voiced AJ Lee with great supporting guitarwork and crooning swing vocals from the charismatic Sullivan Tuttle, these cool guys will be major festival fixtures for years to come.”  – Gate to Southwell Festival

“If I can keep bringing in artists as great as Blue Summit were last night it’ll be wonderful. You do have a brilliant roster of artists.”  – Grateful Fred Americana, Roots & Acoustic Nights 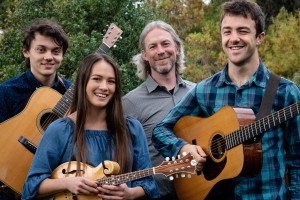 California’s Blue Summit is an outstanding contemporary bluegrass and Americana quartet that also takes in elements of western swing, soul, folk, jazz and pop/rock. The band features young rising stars AJ Lee and Sullivan Tuttle, who throughout their teens were members of The Tuttles with AJ Lee (alongside Sully’s elder sister, celebrated guitarist Molly Tuttle). Now in their early 20s, Lee and Tuttle perform together with their talented Blue Summit bandmates Jesse Fichman (guitar) and Chad Bowen (upright bass), combining virtuoso instrumental work with soaring vocals and sweet harmonies. Formed in 2015, Blue Summit brings a fresh modern approach to bluegrass and Americana music and was named 2018 Band of the Year by the Northern California Bluegrass Society.

“The new face of bluegrass – has earned a national following with her gorgeous voice and winsome stage presence.” –San Francisco Chronicle

A powerful singer, talented mandolinist and gifted songwriter, bandleader AJ (Aissa) Lee has been making waves on the acoustic scene for many years, performing with The Tuttles since the age of just ten! Now a maturing solo artist and leader of this outstanding band, she has already released two solo albums in addition to Blue Summit’s two band recordings, their debut Sweet Company and 2019’s Like I Used To. Blue Summit has performed at gigs and festivals throughout California and across the USA. Early summer 2019 sees them embark on their first visit to Europe, with a short debut tour of the UK on their way to perform at the Westport Folk and Bluegrass Festival in the West of Ireland.