Our virtual festival in October 2020 was a great success! Thanks to all those who tuned in, took a workshop, donated, commented, shared social media posts and completed the feedback survey! You can watch both concerts again/for the first time below. Massive thanks once again to Arts Council England for the funding support.

In the absence of real-life gigs and tours this autumn, we’re delighted to bring you our Fall into Autumn Virtual Festival featuring a stellar line-up of fantastic Americana, bluegrass and roots artists (scroll down for more info and video clips). Please join us on the evenings of Saturday 24 and Sunday 25 October.  We’re planning to live stream on both Facebook and YouTube. Please subscribe to our True North Music YouTube channel (you don’t need to subscribe in order to watch, but it helps us if you do) and like our True North Music Facebook page.  Donations for the concerts are welcome and will help us to pay our performers as much as possible. We will also have several ticketed workshops delivered via Zoom – in dance, songwriting and bluegrass guitar – visit this page for full details and ticket links! 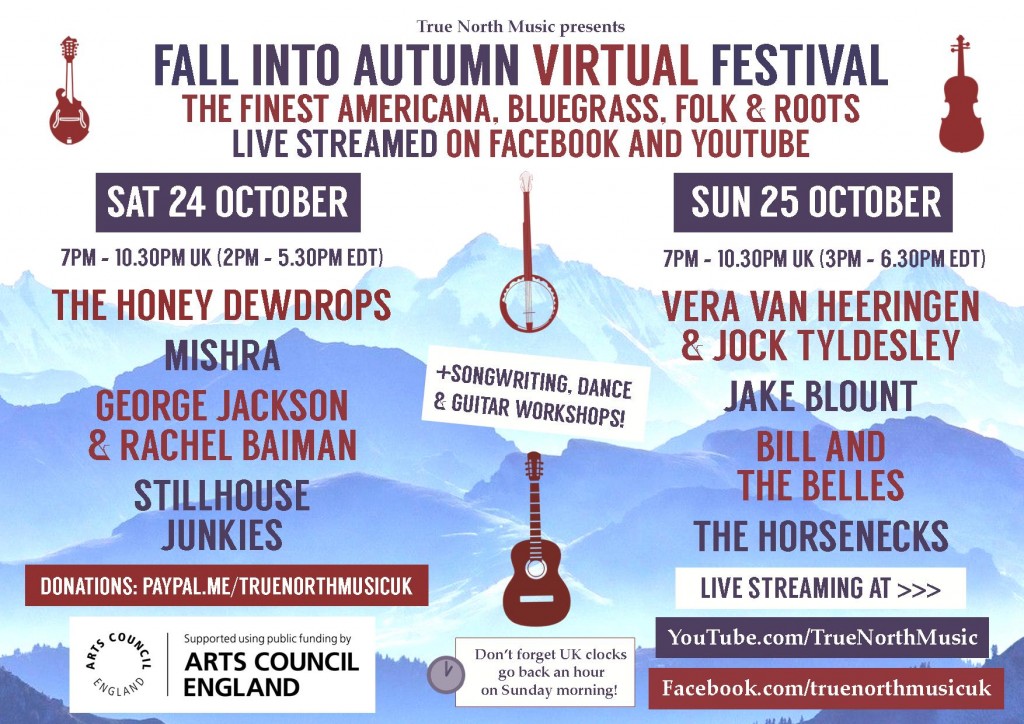 With gorgeous vocal harmonies and exquisite musicianship on acoustic guitars, clawhammer banjo and mandolin, The Honey Dewdrops treat listeners to a raft of memorable, beautifully performed songs. This Baltimore-based duo is undeniably steeped in folk, bluegrass and old-time country, yet manages to gracefully encompass both traditional and modern elements in their music. With five albums to their credit, including 2019’s acclaimed Anyone Can See, The Honey Dewdrops have been touring for over 10 years. Their 2020 UK tour was postponed to 2021 and we’re so happy that they’ll be performing at our virtual festival.

George Jackson is an exceptional fiddler, originally from New Zealand, who was due to make his UK touring debut with his full band this September. The George Jackson Band specialises in rollicking old time fiddle tunes and classic bluegrass songs. George is also a skilled tune writer, and the fiddle tune Dorrigo, from his debut album of originals, went somewhat viral in 2019, with people around the world learning, recording and posting their own versions of it. Rachel Baiman is an outstanding American songwriter, singer and musician who has toured internationally with her own band and as one half of the duo 10 String Symphony. Rachel and George will perform a mix of evocative songs and foot-tapping Appalachian tunes from their home in Tennessee.

Fun and fiery trio Stillhouse Junkies hail from Durango, Colorado and perform an entertaining mix of bluegrass, Western Swing and acoustic country.  Combining outstanding musicianship with a lively stage presence, they’ve met with increasing success over the last couple of years, performing at venues and festivals across the USA and releasing their second album in early 2020. Stillhouse Junkies were also booked to perform an extensive UK debut tour this spring before the Coronavirus crisis hit. Fred Kosak (guitar/mandolin/vocals), Alissa Wolf (fiddle/vocals), and Cody Tinnin (double bass/banjo/vocals) have built up an eclectic catalogue of fine original music, much of it evoking the spirit of their corner of the Southwestern USA.

Jock and Vera are acclaimed musicians both well known on the UK folk and bluegrass scenes. Dutch-born Vera van Heeringen is an exceptional guitarist, singer and songwriter who has released three solo albums to date and tours regularly with her own trio. Jock Tyldesley is an acclaimed fiddler in the Appalachian and Cajun styles as well as a skilled clawhammer banjoist. He toured for many years with the New Rope String Band and has performed and recorded with luminaries including Dirk Powell and Martha Scanlan. Together, Jock and Vera perform a compelling blend of folk, Americana, old time and Cajun music.

Jake Blount is an award-winning young African-American banjoist, fiddler, singer and scholar whose work shines a light on the major contributions that Black, Indigenous and LGBTQ artists have made to traditional music. He has toured internationally with his duo Tui and the band The Moose Whisperers, and recently released his debut full length solo album Spider Tales to great acclaim. Jake is a Board member of Bluegrass Pride, a California-based non-profit which seeks to make bluegrass and folk music more inclusive and welcoming to all. Just a few days ago, Jake was named as one of the 2020 winners of the Steve Martin Banjo Prize, a prestigious award now overseen by the Freshgrass Foundation! Jake’s a rising star, and we’re so pleased to have him perform for us.

Performing here as a duo, Bill and the Belles are influenced by classic country, bluegrass and old time music. Featuring smooth vocal harmonies and exquisite musicianship, their vintage persona is rooted in the music of the 1920s, 1930s and 1940s. Kris Truelsen (lead vocals/guitar) is an outstanding musician, songwriter, organiser and radio producer and presenter. He was awarded the International Bluegrass Music Association’s 2020 Industry Involvement award for his wide-ranging music and community work.  The equally talented Kalia Yeagle is an exceptional fiddler and singer. Alaska-born Kalia is also a lecturer in old time music at East Tennessee State University.

Talented transatlantic duo The Horsenecks comprises the UK’s Barry Southern (banjo, guitar) and Oregon-born Gabrielle Macrae (fiddle, clawhammer banjo, guitar). They often tour in a four-piece band format and performed a brilliant concert for us here in Huddersfield back in 2017. Both Gabrielle and Barry are exceptional musicians, great singers and experienced music tutors, and are steeped in old time Appalachian and bluegrass traditions. Their third album (their first duo release) is due out later this year. Gabrielle is a top class fiddler and clawhammer banjoist, and Barry is the master of the five-string banjo (both bluegrass and clawhammer styles) and a great guitarist too. We’re delighted to have them as part of our programme.

We also want to acknowledge the generous support of Arts Council England who have awarded us some funding from the Project Grants: Supporting Grassroots Live Music fund. Huge thanks to them for this support, which is absolutely vital to help True North Music to survive this time of no

real-life tours and concerts, and adapt to producing online events. It will enable us to pay all participating musicians a reasonable guaranteed fee. We’ll also be requesting donations to enable us to balance our budget and pay the artists as much as possible – so please make a donation if you have the means.