An award winning, entertaining blend of bluegrass and roots from a simply sensational band

We have decided to postpone the next Mile Twelve tour (initially planned for January 2021) due to the ongoing Covid-19 virus crisis. Stay tuned for updates on plans for their return.

The award-winning Mile Twelve is one of the most successful young American bluegrass bands working today, combining contemporary and traditional influences to stunning effect.  Mile Twelve have performed extensively around the world, receiving rapturous praise for their captivating songs, adventurous 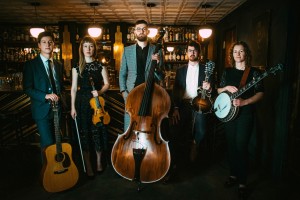 instrumentals and barnstorming live performances. With breathtaking musicianship (on fiddle, banjo, mandolin, guitar and double bass) and stunning vocal harmonies, the quintet is one of the finest roots bands on the live scene. With four members from the eastern USA plus one New Zealander, Mile Twelve formed in 2014 in Boston, where two members studied at the musical hotbed of Berklee College of Music. Since then the band has been on a swift and steady rise, releasing two acclaimed albums, receiving multiple IBMA (International Bluegrass Music Association) awards and nominations, and gaining many fans around the world.

Although their sound is rooted in traditional bluegrass, Mile Twelve surveys a broader landscape on their second album, City on a Hill (2019) a project that feels contemporary and thoughtfully crafted. Produced by legendary guitarist Bryan Sutton, the album begins with a lively rendition of Richard and Linda Thompson’s “Down Where the Drunkards Roll.” From there, Mile Twelve explore a number of perhaps unexpected perspectives, including that of a modern war veteran with PTSD and the story of a Jewish refugee fleeing his war-torn country. The band members bring their considerable skills to bear on these moving and evocative songs, complementing their ability to rock out with the best on some classic footstompers.

“ Mile Twelve has…well-honed and refreshingly honest songwriting, along with powerful playing, singing, and performing. It certainly is a great time to be in bluegrass music, and as we continue to move forward, Mile Twelve is on the cutting edge.” – Bryan Sutton

Asked about the quintet’s influences, Mile Twelve guitarist and vocalist Evan Murphy cites Alison Krauss & Union Station for their precise arrangements and execution, the Del McCoury Band for grit and groove, and the Punch Brothers for their genre-bending virtuosity, as well as songwriting gurus Gillian Welch and Jason Isbell – a clear insight into Mile Twelve’s ambition and versatility.  The band is packed with musical experience and award winning talent. Bronwyn Keith‐Hynes (fiddle/vocals), Catherine “BB” Bowness (banjo/vocals), Nate Sabat (double bass/vocals) and David Benedict (mandolin/vocals) all have a wealth of performing, songwriting and teaching experience under their belts. This band is very special indeed, and we’re sure your audiences will think the same.