Thanks to all the hardworking promoters, and everyone who came out to see Stillhouse Junkies on their debut UK tour. They had a fab time and can’t wait to return – here’s a live clip from Saltaire!

This talented American trio combines influences including bluegrass, Americana, Western Swing, classic country, rock and blues to create a groove-filled blend of American roots music. Born out of a residency at a distillery in Durango, Colorado, Stillhouse Junkies quickly became a fixture on the music scene of that state. Working hard to build their following across the USA over the last few years, they wowed audiences at the IBMA conference and festival in autumn 2021, winning the International Bluegrass Music Association 2021 Momentum Band Award and picking up a record deal with prestigious Nashville label Dark Shadow Recording.  Stillhouse Junkies are stunningly entertaining in live performance, combining fine musicianship, outstanding songs and an energetic stage presence. 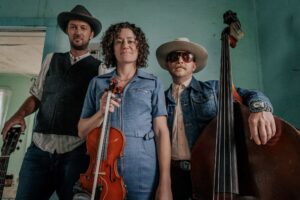 Accomplished musicians Fred Kosak (guitar, mandolin, vocals), Alissa Wolf (fiddle, vocals), and Cody Tinnin (double bass, banjo, vocals) have built up an eclectic catalogue of fine original music which pays tribute to the remarkable diversity of their corner of the Southwestern USA, with evocative songs that run the gamut of human experience. With three albums to their name including 2020’s ironically named Calamity, Stillhouse Junkies spent several years constantly performing live (an average of 250 shows a year!) before the pandemic brought their travelling to a standstill. Over the last two years they’ve kept busy with creative ways to continue bringing their music to fans, including performing a well-supported series of summer front-yard gigs in their home town of Durango, and producing the successful online series Sidecar. In early 2022 they began recording their third album, due for release later this year. We’re delighted to be bringing them to the UK for their debut tour.