Thanks to Front Country for their sensational performances, and to everyone who came out to see them on this run!

Front Country is an acclaimed acoustic band from California, fronted by gifted singer and songwriter Melody Walker and her huge bluesy voice. Based on bluegrass roots but drawing on a broad palette of blues, rock, pop, Americana 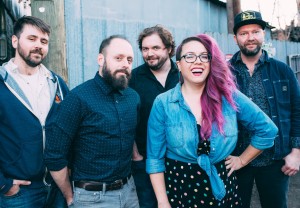 and jazz influences, Front Country has quickly become renowned as a storming live act on the US acoustic scene over the last few years. They refer to their style as “roots-pop” in an effort to explain their wide-ranging but majestic sound. With three previous tours of the UK under their belts, Front Country return at the end of summer 2019 for a range of festival and concert performances. Now based in Nashville, this entertaining five-piece is packed with instrumental and songwriting talent, including Jacob Groopman (guitar/vocals), Jeremy Darrow (double bass), Adam “Roscoe” Roszkiewicz (mandolin/vocals) and Leif Karlstrom (fiddle). All five members have experience in multiple musical genres ranging from classical to jazz and rock.

“Sharply played ensemble Americana, with a powerhouse vocalist who puts the blues in bluegrass” – Rolling Stone

Touring extensively across the world over the last five years, Front Country released their second album Other Love Songs to warm reviews in 2017 and last year headed up the list of Rolling Stone’s 10 New Country Artists to Watch. Melody Walker won the Vocalist of the Year Momentum Award at the International Bluegrass Music Association Awards in 2016, and in August 2017 the band was invited to Tibet to take part in a cross-cultural river trip and music festival, where they collaborated with local musicians. The members of Front Country are proud to be progressive and inclusive in their outlook and their art, and are active supporters of Bluegrass Pride. Above all, this is a simply stunning live band at the height of their powers – don’t miss them!