Today’s the day of the International Bluegrass Music Association’s 2021 Momentum Awards, and I’ll be watching the presentation online. I was delighted to be nominated this year, and although I would be astonished to actually win the Industry Involvement Award (considering the other inspiring people on the shortlist) it’s really gratifying to be a finalist nominee! I wrote the following article for the Autumn print edition of British Bluegrass News, although I only found out after submission that publication would be slightly delayed, probably missing the actual IBMA week! It’s still important to celebrate the success of UK-based bluegrassers (as several have achieved nominations and showcases), so here’s my article in full. I hope you enjoy – please check out and support the people, bands and projects that have been honoured with IBMA nominations this year!

The International Bluegrass Music Association’s annual conference, awards and festival event is coming up at the end of September, and several members of the UK bluegrass community, including myself, have been honoured with Momentum and Industry Awards nominations this year! I know that quite a few readers have visited the IBMA’s huge annual shindig in the past, and at the time of writing, World of Bluegrass is set to go ahead in person (with various Covid precautions in place) in Raleigh, North Carolina from 28th September to 2nd October 2021. The IBMA will also be streaming a selection of online content throughout the week, and virtual attendees will have access to conference sessions, music performances and more on the organisation’s Swapcard platform. Ticket details for the online programme haven’t yet been announced [They have now of course: link to free Virtual Music Pass tickets] , but based on last year’s virtual event, I would definitely recommend it. It’s a great way to participate in the biggest bluegrass event in the world, without having to travel to the USA. This edition of the BBMA’s magazine may not be out before World of Bluegrass but if that’s the case you can still check out the Award winners and doubtless enjoy some great video clips from the week. The British Bluegrass community has plenty to celebrate this year, with three of our own honoured with Awards nominations: Leanne Thorose for Momentum Vocalist of the Year, Emma John for Writer of the Year, and me, Maria Wallace, for the Momentum Industry Involvement Award.

Leanne Thorose is a multi-talented acoustic musician and singer, most notably on driving mandolin and powerful vocals with bluegrass quintet Midnight Skyracer, who have achieved significant success since forming in 2017. The band has released two albums, signed with Island Records and performed across the UK, Europe and Australia. Born in London, Leanne has strong family ties to both Ireland and the USA – her mum is from Donegal and her dad (Ced

Thorose, a celebrated musician and luthier) hails from the USA. Leanne is an accomplished guitarist and fiddle player as well as a gifted mandolinist, and her musical track record (in country music and Celtic folk as well as bluegrass) is extensive and impressive. She recorded her first solo album in Nashville back in 2011, which featured notable guest musicians including Bryan Sutton, Adam Steffey and Scott Vestal! A versatile touring musician, Leanne’s projects have included the Irish Dance show Essence of Ireland (as lead fiddle player) and bluegrass band The Absentees. More recently, she formed the duo Sapphire Storm with Midnight Skyracer bandmate Eleanor Wilkie, with an album due in early 2022.

Journalist, writer and broadcaster Emma John writes on arts, culture, sports and travel for various newspapers and magazines, including as a cricket correspondent for The Guardian. Her first book, Following On, was a memoir about her teenage obsession with the sport. A classically trained violinist growing up, Emma came to bluegrass a number of years ago, when a chance series of events saw her travelling to the USA in order to immerse herself in the music and learn how to play bluegrass fiddle. She spent many months in the South (based primarily in Boone, North Carolina) attending jams and festivals, learning the tunes, making lifelong friendships and falling in love with the music and the community. We’ve all been there, right? Well, not quite in such a dramatic way, perhaps, but I’m sure a lot of us 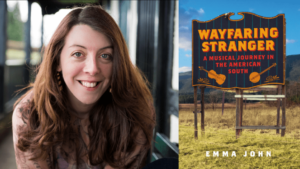 recognise those feelings of joy, companionship and belonging. Emma’s book Wayfaring Stranger came out of these experiences and it’s an entertaining read, especially for anyone interested in bluegrass. It has won several awards including Travel Book of the Year from the British Guild of Travel Writers. Emma also writes for the roots music website The Bluegrass Situation and co-hosts their podcast series The Breakdown, which discusses a variety of legendary bluegrass albums.

As for me (Maria Wallace) I’m a grassroots music promoter specialising in bluegrass and Americana, under the name True North Music. I’m also a singer and songwriter that some of you may know from performing at bluegrass festivals with my band The Reckless Abandoners in recent years. Over the last six years I’ve put on about 50 gigs in Yorkshire, for fantastic musicians including Ron Block, Tony Furtado, Molly Tuttle, Foghorn Stringband, Cardboard Fox and Pharis & Jason Romero. I’ve booked nationwide UK tours for amazing artists including Mile Twelve, Compton & Newberry, AJ Lee & Blue Summit, The Slocan Ramblers, John Reischman & the Jaybirds and Front Country to name just a few, and was making plans to stage my first one-day festival in 2020 until the pandemic hit, and obviously all live music came to a screeching halt. Over the last year or so, with the help of a couple of successful arts funding applications, I’ve managed to adapt to online events, presenting several high quality livestreamed festivals, concerts and workshops which featured Sierra Hull, Jaywalkers, Stillhouse Junkies, The Honey Dewdrops, Vera van Heeringen & Jock Tyldesley, Jake Blount, the Horsenecks, Bill and the Belles and many more. I also write occasional reviews and articles for publications including Folk Radio UK (and British Bluegrass News!) and generally try to spread the word and encourage the support of bluegrass, old time and roots music wherever possible.

Although we’re slowly getting back to live music events, the pandemic has had a devastating effect on concerts, festivals and jam sessions and it has of course been particularly damaging for musicians trying to make a living. IBMA World of Bluegrass is an opportunity to celebrate bluegrass after a very tough year and a half. As part of the 2021 event, online showcases have been added to the schedule and UK bands were chosen for two of these coveted slots: The Often Herd from the North-East of England, and The Fountaineers from Glasgow. The Often Herd are familiar to most on the UK bluegrass scene, [and performed a sold-out concert for True North Music in Meltham several years ago] with an entertaining stage presence, fabulous musicianship and catchy

original songs. They have performed at many UK bluegrass events and in 2018 they won the European bluegrass band contest at La Roche festival in France. A newer band on the scene, The Fountaineers emerged in Glasgow in 2020. A truly international band with an Australian, an American and two Scots in the ranks, The Fountaineers impressed at Battlefield Bluegrass Festival recently and also re-launched the live music series at The Red Room in Northern Ireland this summer. Their exceptional musicianship and joy in playing together is clear to see on video clips and I’m really looking forward to seeing them live on stage in the future. In the meantime it will be great to see The Fountaineers and The Often Herd representing the UK scene in the IBMA’s 2021 showcases.

Visit the web page worldofbluegrass.org for full details of the IBMA’s 2021 event, including the conference, showcases, Awards and festival. If the event has already taken place by the time that BBN is distributed, you’re sure to find a selection of great video content at the IBMA Facebook page or YouTube channel.

More information about Leanne, Emma and Maria can be found online at their websites: