As autumn steals up on us, an update is woefully overdue! 2019 has been a whirlwind year of activity for True North Music, with more tours booked, an ongoing programme of local gigs and some exciting excursions to the USA and Northern Ireland. Way back in January/February, we welcomed The Honey Dewdrops from Baltimore on their debut visit to the UK. This talented duo and their heartwrenchingly beautiful music lit up the dark days of winter – we made a trip to Scotland to see them perform at Celtic Connections before hosting a sold out gig for them at The Carlile Institute in Meltham. While in Glasgow we caught up with our friends The Local Honeys from Kentucky, and I also organised an impromptu jam session at The Pot Still pub, where we had great fun picking and singing with the Honeys plus the lads from Canada’s Lonesome Ace Stringband!

March saw me travel to Nashville to take part in the prestigious Leadership Bluegrass event – a high level management training course centred on the bluegrass music business. This was an incredible opportunity which allowed me to introduce True North Music to the movers and shakers at the heart of the bluegrass community. I owe a debt of gratitude to the British Bluegrass Music Association (BBMA) for their Scholarship Fund grant which covered my course fee, and to my hosts the International Bluegrass Music Association (IBMA), who provided a travel grant contribution. This assistance combined with the hospitality of Nashville friends made my trip possible! On returning to the UK there was barely time to draw breath before the incredible and virtuosic Mile Twelve arrived (another UK debut tour). This award winning bluegrass quintet from Boston is on the rise, and several shows were sold out including our own concert in Sheffield. It was a cracking gig and definitely a contender for best bluegrass band we’ve ever hosted in the Greystones!

Although I didn’t book any April tours, we hosted two fabulous and sold-out Yorkshire gigs that month – by lively UK Americana quartet The Often Herd at the Carlile Institute, and superb Canadian folk/roots duo Pharis & Jason Romero at Sheffield Greystones. In May we had two tours running at the same time, featuring bluegrass and folk legends Ron Block & Tony Furtado (a duo tour of my own devising!) and the equally celebrated John Reischman & the Jaybirds. Both artists wowed audiences across the country and sold out many gigs, including our own Sheffield concert for Ron and Tony, which was simply outstanding. It was made even more special when local heroes Damien O’Kane and David Kosky got up to join the guys on a couple of numbers. Ron and Tony also enjoyed playing Crossover Festival, one of the finest annual bluegrass/old time events in the UK. Just to make sure I had plenty to do, I also performed at the festival with my own band The Reckless Abandoners that weekend!

As May gave way to June, young California band AJ Lee & Blue Summit arrived for a short tour on their way to Westport Folk and Bluegrass Festival in County Mayo, Ireland (run by our good friend Uri Kohen). At our own sold-out concert in Meltham we broke the attendance record for how many we squeezed into the hall. It was hot, it was steamy but everyone there was delighted to witness an incredibly talented young band which practically blew the roof off. The tour was a great success across the country, including at Gate to Southwell festival, and we’re so happy to have been part of bringing Blue Summit to Europe for the first time. Later in June we welcomed Philadelphia quintet Man About A Horse for their debut UK 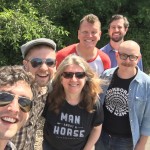 tour. This wonderful band plays a contemporary blend of Americana, bluegrass, rock and blues and won many new fans here, including lots of those attending Maverick Festival. Of course we wanted to put on our own gig for this great band and hosted a Fourth of July special on a hot Thursday night in Sheffield – made even hotter by the sizzling musicianship on display! In July/August we went on our hols with a road trip through Europe, finishing off with a visit to La Roche Bluegrass Festival in the French Alps. This  hugely successful free festival is run (with the help of a small team and many volunteers) by long term resident, Englishman Christopher Howard-Williams, and brings in thousands of visitors to the small town of La Roche-sur-Foron. It hosts some of the very best bluegrass and Americana from the USA and Europe, and it was great to see some of “our” bands like Blue Summit and Mile Twelve performing on the main stage, as well as UK bands The Often Herd, Jaywalkers and Hot Rock Pilgrims – all of whom have performed Yorkshire concerts for us.

Late August and early September brought THREE tours to manage, with Asheville folk/roots duo Hoot & Holler, charming Tennessee quartet Bill and the Belles and mighty Americana roots-pop band Front Country all in the UK at the same time! We had booked them all to perform at Omagh Bluegrass festival in Northern Ireland and had the opportunity to attend this excellent event which takes place in the atmospheric environs of the Ulster American Folk Park. The evening before the festival started, I was also able to attend Front Country’s radio session at BBC Radio Ulster, where Bluegrass Omagh director Richard Hurst talked about the upcoming event and the band played a couple of songs 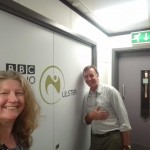 live on air – listen again here –  what a treat to be in the studio for this! We hosted a couple of concerts ourselves before and after Omagh, including a stonking country and Americana double bill with both Bill and the Belles and Hoot & Holler in Sheffield. This was another occasion where the crackle between the bands and the audience made the atmosphere extra-special!  The summer was rounded off with a day trip to The Long Road where both Front Country and Bill and the Belles were performing. This major country and Americana music festival takes place in the grounds of Stanford Hall in Leicestershire. With purpose built stages including the cosy-cabin Front Porch, it was great fun for fans and we really enjoyed seeing “our” bands perform there, as well as other great artists like Rhiannon Giddens and Asleep at the Wheel.

With autumn approaching, we have The Slocan Ramblers from Canada arriving next month, and will be hosting our own concert at Marsden Mechanics on Fri 18th October. Before then, I’m squeezing in a trip to IBMA’s World of Bluegrass in Raleigh, NC alongside a visit to Canada, as I’m delighted to have been invited to Music PEI ‘s conference and showcase of Canadian folk and roots artists in the province of Prince Edward Island! I’m also honoured to have been shortlisted as a finalist in the Yorkshire Gig Guide Grassroots Awards 2019. Thanks to all who voted for us in the Outstanding Promoter category, we’re delighted and hope to see some of you at the Awards shindig at The Underground in Bradford, on Saturday 19th October. Visit the Yorkshire Gig Guide website for more info and ticket details. Thanks for all your support of live music, it helps us keep on doing what we do. Music makes life better!