The major Omagh Bluegrass Festival, now re-styled as Bluegrass Omagh, takes place on the last weekend in May 2022. The event features an impressive line-up of bluegrass, old time and Americana artists from the USA, Canada, UK and Ireland, all taking place within the atmospheric surroundings of the Ulster American Folk Park in Northern Ireland

Most readers may not have much personal experience of the Bluegrass Omagh festival despite its significant size and long, impressive track record. Of course Omagh’s location in Northern Ireland makes travel slightly more complicated for those of us on this side of the Irish Sea, but it really is pretty easy to get to the event via a short flight or ferry from England, Scotland or Wales. Personally, I had never been to Omagh until 2019, partly because the festival’s previous date in early September was always on the same weekend as Didmarton Bluegrass Festival, another major fixture on the UK bluegrass calendar. It’s well worth visiting Omagh as part of a trip to this beautiful area of Northern Ireland, with the vibrant city of Belfast and the spectacular Antrim coast within easy reach (the landscapes of the latter now famed worldwide thanks to their frequent use as Game of Thrones locations). The new dates for Bluegrass Omagh are at the end of May (which will be on the Spring Bank Holiday weekend from next year, once this reverts back in 2023). The main festival will take place at the Ulster American Folk Park on Saturday 28th & Sunday 29th May 2022, with additional performances planned for the town centre of Omagh on Friday 27th May.

The festival site itself is one of the most fascinating aspects of the event in my opinion, and imparts a unique flavor to proceedings. Sited a few miles outside the town of Omagh, the Folk Park is a mostly outdoor museum covering over 60 acres, and including 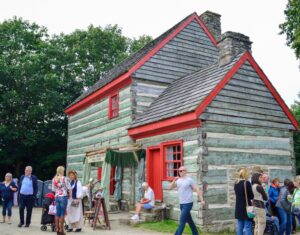 numerous cabins, cottages and other buildings. Part of the National Museums of Northern Ireland, the Folk Park tells the story of successive waves of emigrants who left the shores of Ulster in the 18th and 19th centuries for a new life in America. Their songs and stories (along with those from other Scottish, Irish and English settlers) took root in the New World, and in the Appalachian region in particular the tunes and ballads from these islands melded with African-American music and dance traditions (including the banjo of course). The musical blends that resulted formed the origins of old time, country and bluegrass music, all of which ultimately developed from these uniquely American combinations. So, the Folk Park is a perfectly appropriate location for a bluegrass festival!

The Omagh Bluegrass festival has met with much acclaim over the decades, including an IBMA Bluegrass Event of the Year nomination in 2015, and has hosted dozens of major names in bluegrass and roots music, including Dailey & Vincent, Doyle Lawson, the Claire Lynch Band, Midnight Skyracer, Joe Mullins and the Radio Ramblers, Mike Compton & Joe Newberry, Front Country, Chris Jones & the Night Drivers and many more. Omagh was also the home festival for Cup O’Joe, with the talented siblings Tabitha Benedict (formerly Agnew), Reuben and Benjamin Agnew finding an audience there as young up and coming musicians. They are now local heroes of course,

and Cup O’Joe will be making a welcome return to Omagh in 2022 with a line-up that now includes mandolin ace David Benedict (ex-Mile Twelve), who is married to talented banjoist and lead vocalist Tabitha (also known for her work as a member of Midnight Skyracer). That brings us nicely to the rest of this year’s artist line-up! We don’t have room here to talk about all the performers, but wanted to mention some of the main names set to appear.  American acts on the bill include acclaimed old time Americana duo Vivian Leva & Riley Calcagno, and virtuosic fiddler and banjoist Aaron Jonah Lewis (of Corn Potato String Band). There are also a number of excellent British and Irish artists set to perform, including Glasgow band The Fountaineers and Cork-based Dutch/American duo Long Way Home.

The main Omagh headliners for 2022 will be The Slocan Ramblers (Canada) and Seth Mulder & Midnight Run (USA). Formed in 2015, Midnight Run spent five years crafting their high-energy brand of traditional bluegrass while performing a longstanding residency at the Ole Smoky Moonshine Distillery in Gatlinburg, Tennessee. They honed their performance chops (and jokes) during their time as the house band there, and their exuberant delivery and impressive musicianship will be perfectly suited to the Omagh festival vibe! Convivial frontman and mandolinist Seth Mulder and his bandmates are bound to charm the Northern Ireland audience with their footstomping old-style bluegrass. Midnight Run have been building their reputation further afield over the last few years, and were nominated for the IBMA’s 2020 Momentum Band of the Year Award. They have impressed UK bluegrass fans on a couple of previous visits, and there is an extensive European tour planned for May/June 2022, including a number of UK gigs.

Entertaining Canadian quartet The Slocan Ramblers are also bound to go down a treat with the Omagh audience, having built a worldwide reputation as a barnstorming live band. Winners of the International Bluegrass Music Association’s 2020 Momentum Band Award, their plaudits also include Traditional Album of the Year at the 2020 Canadian Folk Music Awards and a 2019 JUNO nomination. With banjo, mandolin, guitar and double bass, the Slocans perform a mix of traditional and contemporary bluegrass, with their fine original songs and tunes meshing nicely with classic standards and creative cover versions. Their three previous tours of the UK have seen the Slocan Ramblers perform many sold-out gigs across the country, including a run of dates in Northern Ireland in 2019. Their Bluegrass Omagh appearances will be the only dates on this trip to Europe, but they’re planning a UK tour in the autumn, so look out for news later in the year.

So all seems set fair for a highly entertaining weekend of music and fun at Omagh this year. Although there’s no camping on site, camping facilities are offered at Omagh Rugby Club nearby, with a shuttle to the festival site provided. There’s also a variety of hotel and B&B accommodation in the area, and festival ticket prices are a bargain (£40 for an adult weekend pass, £95 for a family weekend pass etc) which helps offset the costs of travel and accommodation. Full disclosure from me: as a booking agent, I’m sending two artists (The Slocan Ramblers and Vivian & Riley) to the festival, so I’m declaring my interest here! But those two acts represent just a small fraction of the bands performing at this major event, and I’m writing this article as someone who wants to support the whole UK bluegrass scene and encourage people to get out and attend bluegrass and old time concerts and festivals. While Omagh Bluegrass is well known as a major regional attraction in Northern Ireland, I genuinely believe that it deserves much more attention from fans of the music in the rest of the UK, as well as further afield. It’s a flagship event showcasing bluegrass to big audiences, something that we should surely all support. Bluegrass Omagh is celebrating 30 years of existence, so let’s hope it will continue to thrive long into the future! For more information about Bluegrass Omagh 2022, visit the festival website at bluegrassomagh.com