This talented American trio combines a wide range of acoustic genres including bluegrass, Western Swing, blues and a touch of classical, to create an attractive groove-filled melange of American roots music. Born out of a long-standing weekly residency at a distillery in Durango, Colorado, Stillhouse Junkies quickly became a fixture on the music scene of that state’s southwestern corner, establishing a solid local fan base in recent years. They’ve met with increasing success over the last year, including taking second place in the prestigious band contest at the Telluride Bluegrass Festival, and have been touring extensively across the USA. 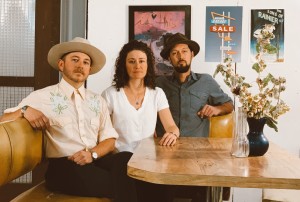 Accomplished musicians Fred Kosak (guitar/ mandolin/ vocals), Alissa Wolf (fiddle/ vocals), and Cody Tinnin (double bass/ banjo/ vocals) have built up an eclectic catalogue of fine original music alongside some fun and creative covers, drawing on influences from Gillian Welch to the Allman Brothers and Tim O’Brien to John Hiatt. The Junkies’ original music pays tribute to the remarkable diversity of their native Four Corners area of the Southwestern USA, with evocative songs that run the gamut of human experience: disenchantment with the pace of

modern living, confronting adversity in its many forms, and story songs that imagine reality from the perspective of a small-town bartender or a lonely cattle driver. With two albums to their name and their third release expected in early 2020, Stillhouse Junkies have spent the last couple of years constantly writing, rehearsing and performing throughout Colorado, New Mexico, Arizona, and Utah. We’re delighted to be working with them on their upcoming debut UK tour!