Joe Newberry & April Verch are simply outstanding musicians and entertainers, and this USA/Canada collaboration is fuelled by a shared passion for traditional music, blending elements of folk, bluegrass and old time Americana. With joyful fiddle tunes, evocative songs and April’s spectacular step dancing, Newberry & Verch deliver a sensational live show that appeals to a wide range of audiences. On previous UK tours they have performed at venues and events including Celtic Connections festival and Cecil Sharp House, and were featured on BBC Radio 3’s Music Planet.

Based in North Carolina, Joe Newberry is a renowned banjoist, guitarist, singer and songwriter, a charismatic performer who charms audiences wherever he goes. He has been a guest star on the popular Transatlantic Sessions live tour and his award-winning songs have been performed and recorded by artists including Watchhouse and the 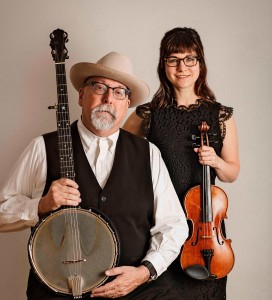 Gibson Brothers. A longtime and frequent musical guest on long-running radio show A Prairie Home Companion, Joe performs with various projects and collaborations in addition to Newberry & Verch, including his duo with mandolin legend Mike Compton. Joe is also an in-demand and much beloved teacher of singing, songwriting, banjo and guitar.

April Verch is an acclaimed fiddle player, step dancer and singer from Canada’s Ottawa Valley, and the rich musical and dancing heritage of the region is at the heart of her work. April started step dancing at age three and playing the fiddle at age six! She has numerous awards, fourteen albums and twenty years of worldwide touring under her belt, mostly with her trio the April Verch Band. In 2021 April received a Canada Council for the Arts grant for her online step dance collaboration with the UK’s Simon Harmer, Steps From the Heart, an exceptional project which combined research, new choreography, performance and teaching. April is a highly respected tutor of music and dance, and teaches online as well as at camps and festivals around the world.

These two hugely talented musicians tour together regularly as Newberry & Verch, releasing their first duo album in 2017. Their collaboration is a seamless and compelling blend of Canadian, Ozark and Appalachian traditions, spanning folk, bluegrass, Americana and old time country music. Their voices blend in harmony, their instrumental playing is unsurpassed, Joe’s songs and stories are moving and hilarious by turns, and the addition of April’s stunning step dancing takes their live performances to another level!

Now booking for late August/early September 2023. Please contact us to book this artist