Captivating Americana from the Emerald Isle

Popular Americana-roots band I Draw Slow have been honing their craft for over a decade, selling out venues in their native Ireland and releasing four albums to critical acclaim. Performing a compelling blend of old time and 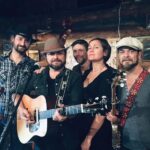 contemporary Americana, the Dublin-based quintet has been steadily building a strong reputation across the Atlantic, and were signed to leading Nashville label Compass Records in 2017. The band is well-established on the American folk and roots scene, touring numerous times across 25 states and performing at many major USA festivals including Merlefest and Grey Fox. As live touring opens up again, I Draw Slow are planning to add the UK to their busy itinerary, and we’re delighted to be working with them to make that happen.

“Whatever Americana scene there may be in Ireland, I Draw Slow have surely conquered it. These songs sound hewn from the Smoky Mountains in Tennessee, and not their native Dublin. ” – The Sunday Times

I Draw Slow imbue their brand of roots music with an appealing, distinctive flavour, with Louise Holden’s captivating voice complemented by outstanding musicianship on fiddle (Adrian Hart), clawhammer banjo (Colin Derham), acoustic guitar (Dave Holden) and double bass (Konrad Liddy). Siblings Louise and Dave have been writing songs together since a very young age, and their brother-sister harmonies add extra charm to the band’s sound.  The band’s fourth album, Turn Your Face To The Sun, went straight in at #1 in the Irish Independent Album charts, and they’ve used their time off the road to work on their next album, due to be released later this year.  A major part of the quintet’s appeal lies in their live performances, which showcase the band’s exceptional musicianship and charming stage presence.

Now booking a very limited handful of dates for autumn 2022, with more planned for 2023. Please contact us for availability.