Drawing on the roots of old time and bluegrass, this highly impressive duo features two gifted young musicians who are already leading lights in the new generation of American roots music. We’re delighted to be planning Tatiana and Allison’s second UK tour after a very successful debut outing in November 2019. 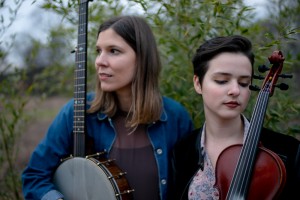 Talented banjoist Allison De Groot has made a name for herself for her intricate clawhammer work in Molsky’s Mountain Drifters and as a member of The Goodbye Girls. Originally from Winnipeg, Canada, Allison gained a performance degree from the prestigious Berklee College of Music and has since toured all over the world, playing festivals from Celtic Connections to Rockygrass and Denmark’s Tønder Festival. Tatiana Hargreaves is a phenomenal old time and bluegrass fiddler based in North Carolina. Tatiana was a fiddle prodigy from a young age and has performed with luminaries including Gillian Welch and David Rawlings. She also contributed her bluegrass fiddling to Laurie Lewis’ Grammy nominated album The Hazel And Alice Sessions. Tatiana released her first solo album in 2009 and has gained acclaim for projects with Jake Blount,  Ethan Jodziewicz and  powerful, zany bluegrass band Hard Drive.

Together, Allison and Tatiana create a sound that is adventurous, masterful and original, whilst still paying homage to the best of Appalachian traditions. Their self-titled debut album (released March 2019) not only showcases their hugely impressive musicianship, but also reflects on the expansive, diverse canon of American roots music. Alongside classic tunes, the duo performs lesser-known American fiddle and banjo songs from the likes of African-American duo Nathan Frazier & Frank Patterson and bluegrass pioneer Alice Gerrard. In live performance, Allison and Tatiana create scintillating, foot-tapping music, taking the banjo and fiddle duet to another level!

Please bear with us at this very worrying time. Due to the ongoing Covid-19 virus crisis, we have had to cancel some of our UK spring/summer tours - please see individual band pages and stay tuned for more news. Please stay home, stay safe and support independent musicians by buying their music online or donating to online gigs!